Angela's Decision: A Journey of Adaptation 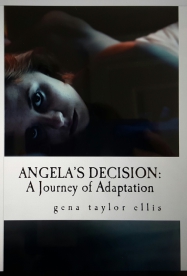 4  A multi-faceted book, this is a companion to Gena's film, ANGELA'S DECISION. Part memoir and part filmmaking info, this book also inludes the original short story, adapted script, and excerpts of the TV pilot and shooting scripts, along with photos from the film shot in Australia.

The story of the writing and making of Angela's Decision also parallels the War in Iraq, and with two bonus short stories about the Korean War and Iraq, this book also adds to the body of literature about war. For film fans and filmmakers.

Thanks to Director Mat King, cast and crew who brought the story to the screen. Original soundtrack by Liam Gerner and Christopher Slaski.

Also available on Kindle as e-book.

In a small Appalachian town, an elderly mother embarks on her annual Christmas tradition, a journey through time and the Korean War, arriving at an unexpected destination. Artwork by Victoria Shultz.

Gena interviewed service members of the Soldiers', Sailors and Airmen's home in Washington, DC for this magazine article. On the cover is the Korean War Memorial sculpted soldier with a holiday wreath. Photo by Lt. Col. E.T. Magdziak