Gena is founder of Brown Dot Productions and a daughter of Appalachia where storytelling is as old as the hills. She is an award-winning screenwriter and producer, author, journalist, army veteran and has been a background actor. The background of life is where the best stories are mined, so Gena can be found there, digging up stories for her scripts and a novel in progress. Her passion for writing the adaptation led to adapting Alexander Dumas' novel THE BLACK TULIP into ROSA AND THE BLACK TULIP, winning Best Script at film festivals such as the London International Filmmakers Festival and a Live Read in Toronto at the Female Eye Film Festival and Runner Up, Best Screenplay and seeking production and investment. Gena even wrote a book on adaptation, ANGELA'S DECISION: A JOURNEY OF ADAPTATION, which contains her own short story set in WV and adapted script for her award-winning film, ANGELA'S DECISION, made in Australia.

Gena learned much about the production process from her daughter and writer-director, URSULA ELLIS. Gena likes promoting a positive economic impact with film. Especially in her hometown in West Virginia where she co-produced Ursula's award-winning film and Alfred P. Sloan Foundation grantee, CRICK IN THE HOLLER. And in Huntsville/Madison, Alabama, one of her 'adopted' hometowns, where Ursula is a Bob Jones High School alum and where she filmed FOR GEORGE ON HIS 30TH BIRTHDAY, making fest rounds now..

Gena also experienced film as a background actor while living in Chicago, including TV shows CHICAGO FIRE and SHAMELESS. She was even bumped to featured extra in an Indie film in the Windy City, where she also ran screaming for TRANSFORMERS: DARK OF THE MOON. Gena was even chosen to record extra screams for the film. Gena also worked on the international hit and Bollywood film DHOOM 3. She encourages writers to work on a production as it only enhances the screenwriting process. She even drove hours to work on NASHVILLE.

Gena is from no-woman's land by the lake town of Summersville, WV. A Canvas Grade School alum, she is a graduate of Marshall University and the University of Oklahoma. Besides Brown Dot, view LinkedIn for official business-y stuff, too. She also gives seminars and workshops so if you're interested please contact her. 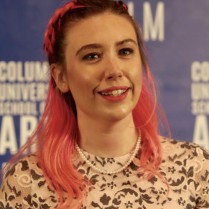 You may view Ursula's film photos and news here on this site, too. All films listed on this site were written and directed by Ursula, except for Angela's Decision. Ursula taught us a lot about filmmaking and we can't wait to tell about her next projects!

Stay tuned for her next film For George On His 30th Birthday and all the good news and future fests and screenings! We'll definitely share it here at BDP! Crick in the Holler, her graduate thesis and Alfred P. Sloan Foundation grant film, is still going strong at festivals and winning awards!

Ursula on the Crick in the Holler set in Pence Springs, WV 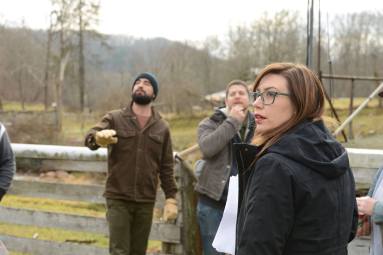